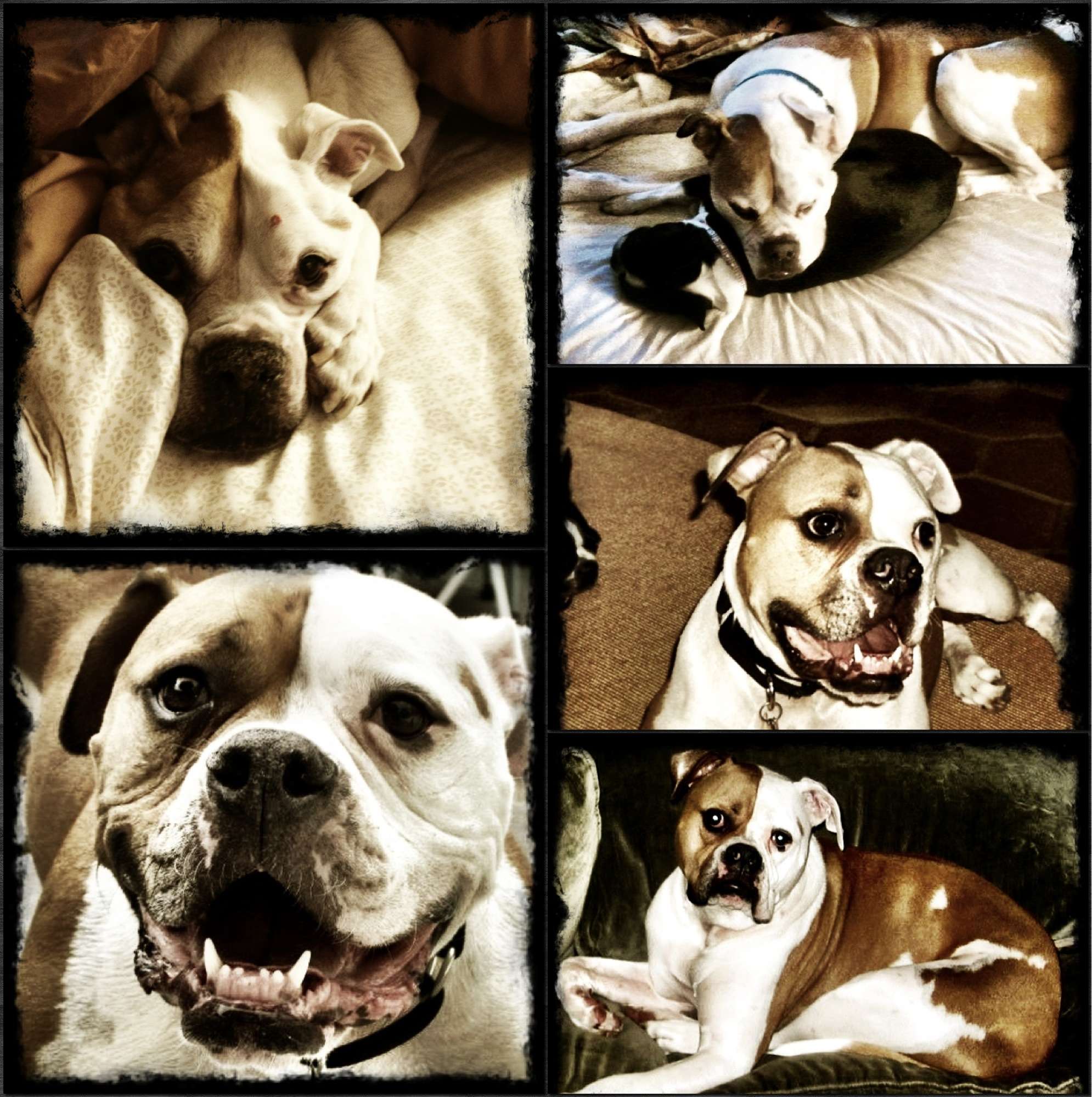 In response to a post on Owningpink.com by my coach, Lissa Rankin,  called How To Keep Your Heart Open When You Lose A Pet – Part 2.  Her sweet dog Grendel died unexpectedly on Father’s day and I know she has been grieving in her own way.  Her post ended with an invitation to share the story of losing your pet and in sharing this story, I am healed and a little bit more open.

I read this….and FEEL. and then FEEL more. And then you take the subject from you to me with your question and my heart rips open and the sadness and pain of watching Hank pass, of holding him while the same shot was administered–thinking if I hadn’t asked the vet to come and let him go, he would still be here.

As 3 other mutts play at my feet, including the big boy, Leroy Brown, that I know Hank sent, I am cognizant of my own (but big) cedar box on the shelf just over my shoulder. The book of 12 years of photos. And all I can do is lean in to the grief.

He was with me for 12 years. I trained him and while I’d grown up with dogs we’d never been able to house train one..and growing up pets were owned more than loved. Hank gave me a new start with loving animals and bringing dogs into the family rather than treating them as toys in the yard.

At 10 weeks, a vet told me I had a lame dog and I should put him down. No way- I already loved him! Fortunately a 2nd opinion revealed his bones were growing faster than his muscles and he just needed to stretch the muscles. To casts and 4 weeks later that teeny boppin pup was just fine.

At 2 years, when my husband left on a random Wednesday afternoon, Hank was there with his head in my lap, his fur catching my tears. After that, he got protective and aggressive and I spent 4 more years training him- Canine Good Citizen, Agility 1, Advanced Agility– anything to keep him active, loved, and out of crazy aggression.

He was my big tough boy- emotional and hurt. Fearful of thunderstorms, cats, beetles, and the remote control. But he was the best cuddling dog-ball there ever was.

When I married, we merged my 2 dog family with my husband’s rescue mutt. Our pack was playful, and peaceful and joyful for 5 years….until I started to sense something.

My intuition whispered Cancer. I’m ashamed to admit I dismissed it and some mild symptoms long past the “SHOULD TAKE HIM FOR A CHECK UP DATE.”

In the past, I’d spared no expense, never missed a shot, bought premium dog food, and shelled out money for high dollar arthritis meds for two years….but this I could not face. I could not take him and hear that he was dying.

And then I had to.

November 2011. His blood levels were messed up and he had intestinal cancer – probably kidney cancer too. EFF CANCER– I’d just lost a good 34 year old friend, also an Allison, the weekend Hank was diagnosed.

I used to travel almost weekly for my business, and I was so fearful every time I went to draw, or coach. I was terrified that he would die while I was gone.

My husband and I made “What to do if he dies” plans. Things like– call me immediately, no don’t I’ll have to finish the gig. Keep his body until I can say good-bye. ALL these thoughts flooded my mind for months while I nursed him, gave him 17 pills a day, made special food concoctions that would be good for his digestion and liver.

None of these to save him, but to give us time- after all he was still a little spunky from time to time, was eating and drinking and eliminating almost regularly.

I was blessed at one point to have a dog masseuse come to the house and do some work on Hank. It was more than a massage. She played soft music, spoke in loving words and asked me, “What has Hank done for you?” while we both sat stroking his fur and frail body. For a few hours, she gently guided me through loving memories, held my tears, and then offered to anoint him with rosemary oil– and she asked me to just thank Hank for all the things he’d been and done for me. It wasn’t Hank who needed the healing, it was me.

I’d had a 40th birthday party planned in Tulum…and a psychic had told me that Hank needed me to be gone so that he could go…that he would die while I was away.
I said my good bye’s, asked Hank to please wait despite what the psychic said, and then left him at my parent’s house and took my long planned and paid for trip.

7 days later I returned to waggy-tail-happy-mama-is-home Hank – and sighed with deep gratitude. That was the first week of February, 2012.

The 18th of February, I’d been gone most of the day, and when I got home, Hank had not moved from where I’d left him earlier that day. We soon discovered that he was just too weak. He’d gone from 80 lbs to about 40 – the cancer meds KILLED all his muscle. His mind and heart were so there and his body was not. My husband and I agreed — it was time.

We called a vet and she agreed to come to our home the next day.

We spent the next 20 hours cuddling, feeding him a cheeseburger, taking photos, and more cuddling…and then waiting.

The vet agreed with us, that it was time, even though Hank was so mentally present. He lay on my bed, and I just held him. Stroking his face as she injected the sleeping part of the medicine. I felt his body go limp, but could still hear his breathing. I held him for a few more moments, and whispered all the love I could into his ears, and then she administered the next shot, and his breathing stopped.

For the briefest of moments, I felt his spirit-pure LOVE and CONNECTION– go through his back and into my heart (I was spooned up against his back) and I felt the deepest peace and light flash through me and then out. He was gone.

Oh GOD the pain was too much to bear and I never have cried so hard. I scooped his body up onto mine and just fell into the tears of grief that filled the whole room. It was the one and only time I’ve seen my husband of 6 years cry.

I said good-bye to his body and then went back to my room and sobbed for a long time. My husband and I just held one another… in that grief. It wa

s the first grief we’d shared together- and somehow that healed a bit of our marriage (the 2nd for both of us).

The grief was thick and the guilt thicker. All the questions around putting my pal to sleep– was it too soon? Could I have done more? Did the cancer meds kill him faster than the cancer would have? If I hadn’t called the vet, he would be here with us now? — and more tears.

Making photo albums, and posting pictures on facebook was cathartic. And in time, I wasn’t crying every day. I felt like from November, through Hank’s dying and death in February, and the after grief in March and April- was a true dark night– a deep winter in my heart. And, I let myself hibernate.

No coincidence that I was hosting a renewal retreat for my clients the last weekend in April. And that weekend I found my spring and was renewed again. I also began looking for a new puppy. I just KNEW that Hank would come back to me.

Hank didn’t comeback to me. But he did bring me Leroy Brown, this I am sure. For brevity, I won’t go into all the little circumstances of that story here. I will honor Hank, my best pal and soul-dog for 12 years. I will honor his health, and his illness, and his death, and I will honor our story and the deep grief he lead me to and the love that carried me through.

The loss was great…and the love was greater. Much greater.

Hank will be a part of me forever and my heart is open because I know we will meet again.

Spread the love
dealing with drief of a pet love what is the loss of a pet
by allisoncrow
previous article: Tips for Leaving Soul-Sucking Work and Moving Toward Soul-Full Work
next article: My Viz Notes from Marie Forleo’s Crazy Sexy Interview w/ Kris Carr

Going back out into public life after shelter in p

Take a long, slow, and deep breath.... Then exhale

Naps are profitable. Naps are restorative to mind